We are lovers of soups - all kinds.  And Winter and soup just seem to go together. They warm and nourish us when the temperatures outside are frigid. 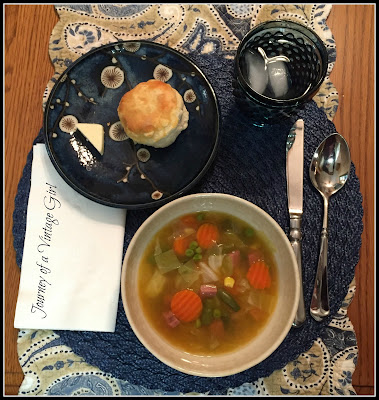 For the most part, it isn't necessary to follow a recipe to make a delicious soup. For this one, I started with some ham that was in the freezer from Christmas and used half a box each of chicken broth and vegetable broth. Then just added frozen peas, green beans, corn and carrots and chopped some fresh cabbage. It all depends what I happen to have on hand. 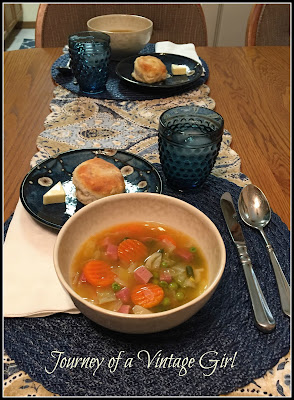 I added a biscuit, and called it supper! Schwan's has wonderful biscuits, and the best part is that, because they are frozen, you can simply bake the number you need. I have always made my own, but end up with too many, so this is the perfect solution. 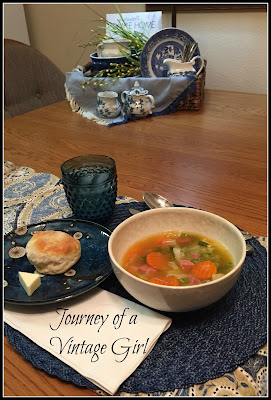 I like to have a seasonal vignette on the corner of our table - it keeps it from getting piled with 'stuff,' and it's pleasant to look at. This season after Christmas is always hard. I decided on putting together some blue and white dishes, and added a touch of yellow to remind us that Spring comes next! 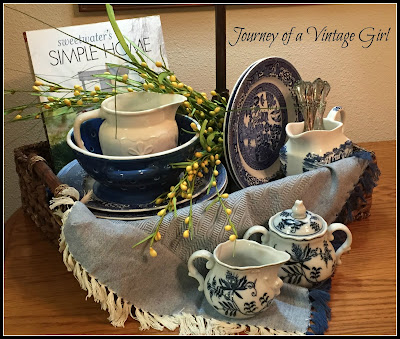 Until next time...
Blessings,
Gail

Mystery at the Ranch... And It's Done!


it was Spring of 2014 when I signed up to participate in a Mystery Quilt sponsored by Always Your Design quilt shop in Dell Rapids and The Dutch Rose of Sioux Falls. This is a quilt that is sewn not knowing what the final product will look like. I thought it sounded like fun. We were given guidelines about choosing fabrics to use and told how much was needed. So I made my choices with a certain recipient in mind and I was ready to make this quilt that was called Mystery at The Ranch. 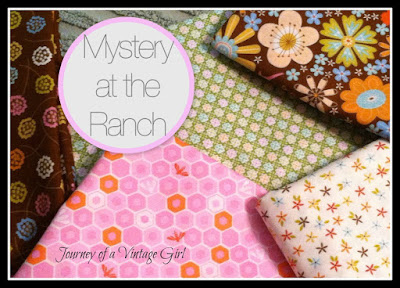 Each week brought directions for another step in the construction process. It was in the first week when all the cutting took place that I became a bit concerned. There were going to be a lot of triangles to deal with - 392, but who's counting!  If you've done any quilting you know that means one side is on the bias, which can stretch, and each triangle has three points that are supposed to meet up perfectly at the seams. In other words triangles can be tricky and should be sewn precisely. Oh boy! 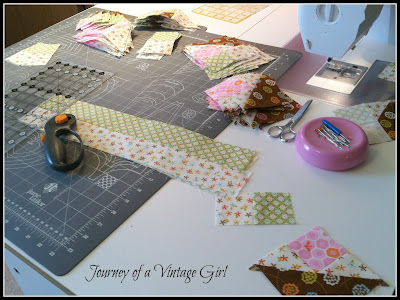 So I tackled it. I cut strips, sewed strips together and cut again. Slowly the pieces combined to become an interesting combination of colors and patterns. 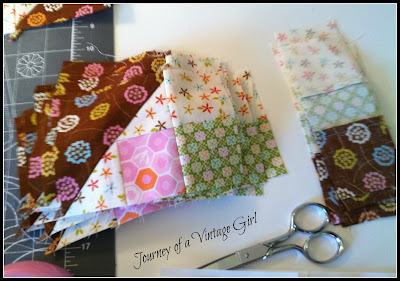 And then it came to a halt. I received the final directions, saw the final outcome, was tired of dealing with triangle points, and lost interest. So it was tucked away until last summer when I decided I wanted to finish it, I needed to finish it. 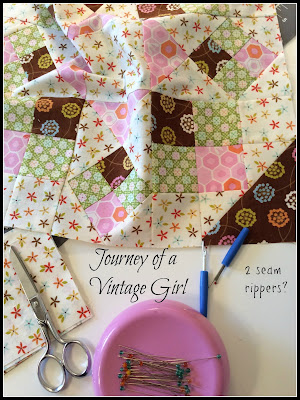 I made the decision not to worry about a point getting lost in a seam, and just enjoyed sewing away, joining the blocks with sashing strips and adding the borders. I chose a plain flannel for the backing and had it quilted with a flower pattern using a variegated thread on the back, so the back is quite interesting as well. 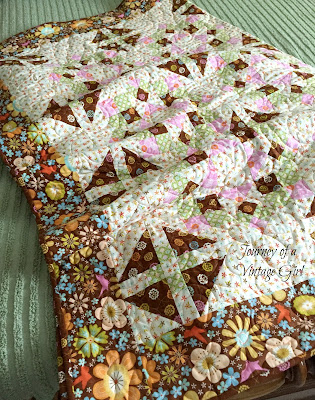 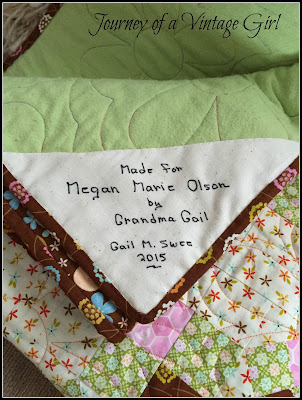 I'm pleased with the final outcome and my Granddaughter loved it - a quilt that was promised to her long ago. Now I'm about finished with her brother's, which he has been waiting for even longer! Then I have fabric for a couple other projects just for me. 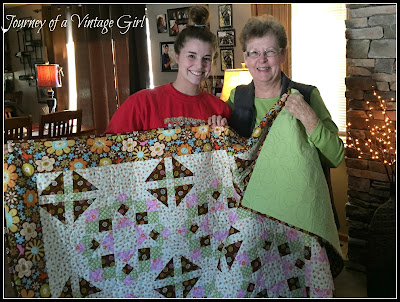 PS: Did I mention there were 392 triangles? Never again!

Packing away the Christmas decorations always leaves a rather bare feeling to the rooms. The lights have been unplugged and the sparkle has been tucked away. What now? I brought back all my 'regular stuff,' but also left out a few things that will carry me through this winter season.

My chenille snowmen and snowman garland are favorites of mine and have been with me for many years. I remember buying them at a little bath shop in the Park Ridge Mall in Sioux Falls while shopping with Mom and my Aunt June. I think I might remember it so clearly because purchasing them was really a splurge at the time. So they will bring a smile to my face through these cold days. 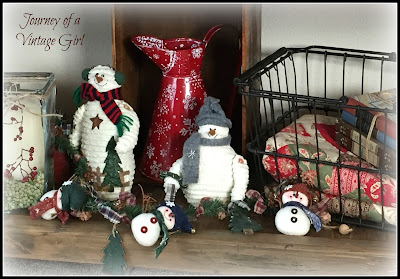 Pine cones and a faux evergreen stem tucked in a treadle sewing machine cabinet drawer are certainly appropriate for winter. I find so many used for these drawers, and this one is so pretty! 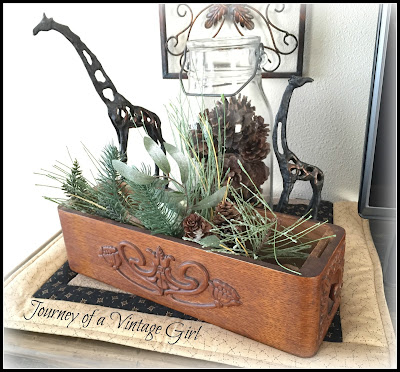 These two silver deer are holding their heads high in our hutch for now. They have a little glimmer to them. They came home with me from The Cottage a few years ago. 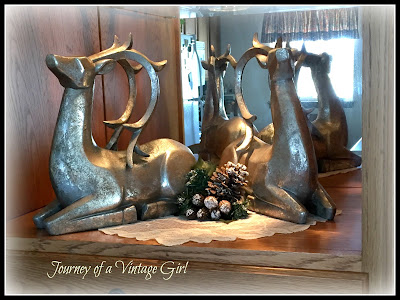 And finally, a single pine cone sits atop a new decorating book and a new-to-me stool. I have long wanted to put a pine bench in front of our couch to serve as a coffee table. But no matter how many times I found one and planned how to decorate it, the truth is I simply don't have room for a coffee table. So, I've found the next best thing - this cute little stool. It is tucked in front of the couch, but if we need more seating, it can easily be moved aside. 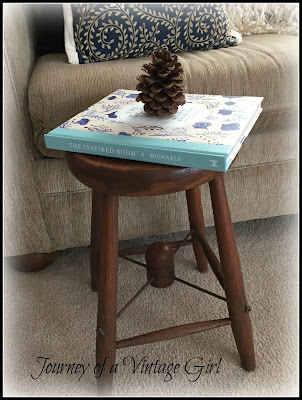 It seems that new seasons bring with them the desire to change things up - at' least that's how I feel. So for now, this is my winter look. I think I might just make a cup of hot chocolate and browse through that book.

Till next time....
Blessings,

Remember as a kid when we returned to school after Christmas, and the question on everybody's lips was "What did you get for Christmas?" Even though I only have one picture to attest to it, for most years as a little girl I think my answer was that I had received a doll. 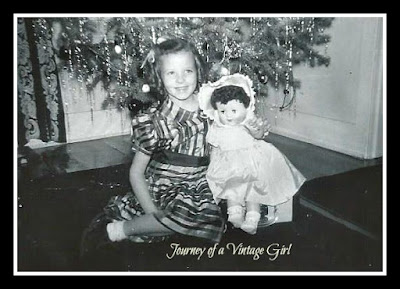 I still have the doll in that picture, and she is still wearing her peach dress and bonnet, although it is a little droopy. 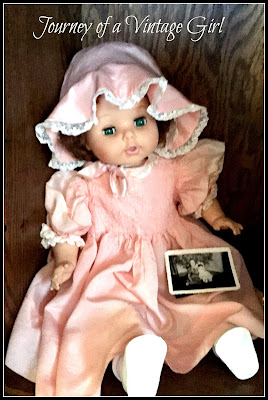 The second doll that I still have is bit fancier. She is wearing a dress that my mom made for her. I have her original pinafore dress, but it is so faded that she prefers not to wear it. Both of these ladies have 'had some work done.' 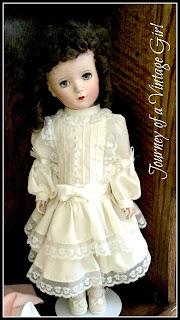 A third doll was given to me when I was a little older, not necessarily to play with.  She came with fabric and patterns so that I could learn to sew for her. Some of those early attempts are tucked away - not really photo worthy, but they were the beginning of a lot of garment sewing that would follow. This little lady will walk with you if you hold her arm and move her just right. She is wearing her original dress. 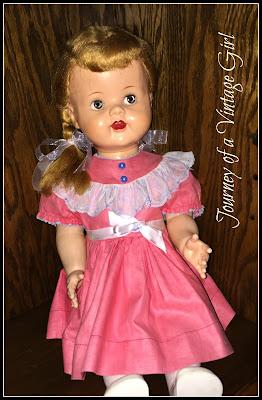 And this shelf holds my two storybook dolls and china doll heads, but that's a story for another day. 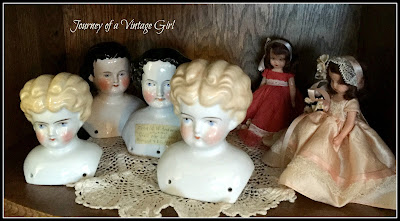 And what did you get for Christmas as a child?

Blessings,
Gail
Posted by Gail at 12:51 PM No comments: 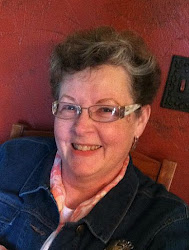 Gail
Southeast South Dakota, United States
I am not yet antique, but definitely vintage - thus the name. But I also love all things vintage, and find joy in blending yesterday with today. Through this blog I will share with you memories from the past as well as comments on the world around us today from my vintage view. There will be pictures of things that inspire me, and hopefully inspire you as well as we all strive to be and do our best and create beauty around us.